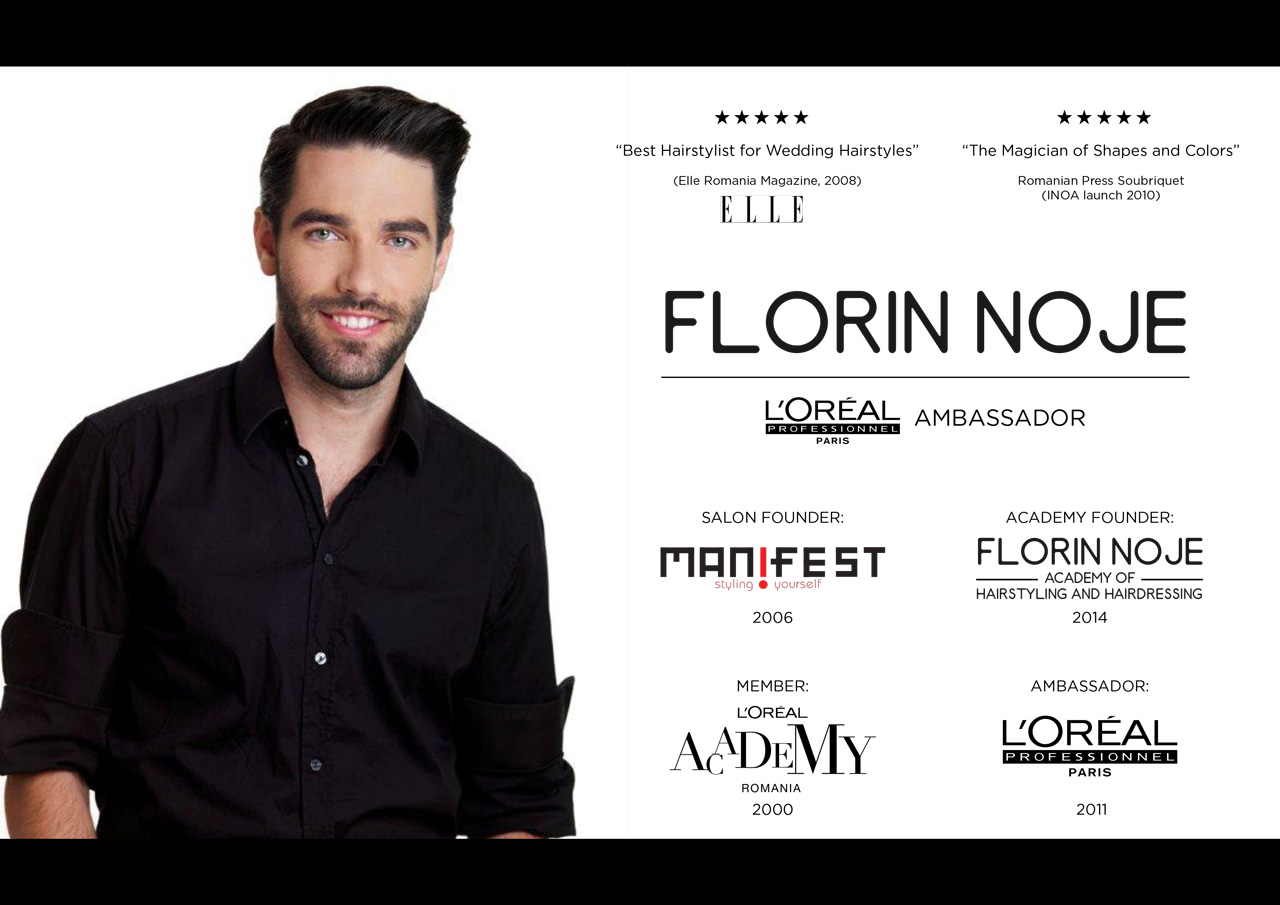 Naturally endowed with a perfect sense of shape and color, next to an absolute understanding of aesthetics as a whole, he is one of those few for whom hairstyling is not a job but a calling. One he became aware of since he was a teenager and started honing with intense study, practice and training. Thus, in 2000, his talent and devotion were acknowledged by his becoming a member of the L’Oréal Academy. A challenge he met successfully and which determined him to believe he has even more in his power to represent L’Oréal Professionnel as Ambassador all over the world.

The hairdresser par excellence, Florin has a strong grasp of extravagance and boldness, performing them with rare elegance. His gestures are firm, precise and seemingly effortless and always come as an expression of his emotions. A young artist, in his glorious 30s, is far from playing by the rules and miles away from conformist views.

He redefined the art of hairstyling with his revolutionary approach and progressively turned into a new generation artist, unanimously acclaimed every time he is on stage.

His innate perception of chromatics, worked in an urban and very contemporary manner, have gained him raved reviews and the admiration of the press who named him “The Magician of Colors”.

With one of the most coherent on-stage performance, in his shows everything comes together harmoniously, from the apparel and music to the make-up and the whole on-stage dynamics. He is a complex, intuitive and a flawless art director.

Having the opportunity to work with the most representative titles in the fashion magazine industry, such as Elle, Cosmopolitan, Glamour, Les Nouvelles Esthetiques, Bolero, The One, Tabu, Marie Claire, Cockaigne, and to collaborate with famous photographers and designers, Florin Noje has met with outstanding popularity and appreciation among great professionals. The improvement of his techniques and search of new brave, groundbreaking concepts in the art of hairstyling, has placed him always one step ahead of his generation. Designated Best Hairstylist for Wedding Hairstyles by Elle Magazine, Florin Noje is always at work, never at rest. Masering the art of shapes and colors.

I can’t remember the time when I left my house without my shears. In the beginning, I was cutting hair. In time, I realized that hair cannot be cut. Hair builds. Hair challenges.

Hair is the color, the shape, the mood, the feeling of genuinely seeing people rising up their eyes. Hair is, maybe, the entire humanity reduced to one single word: challenge.

Hair thought me to live without spare time. In a continuous and sweet challenge of every possible limit. Thus I realized I HAVE the best job in the world. It allows me to gravitate around the whole Universe and still remain framed in reality.

It was said that I have a great sense of shape and color and that I understand aesthetics as a whole. I thank those who think so, at times I needed the encouragement. Still do.

But truth is, I need most of all, the beautiful energy that people – happy satisfied people give me. The intensity of their happiness after being styled is the trigger to my own passion.

It makes me more and more curious of the flexibility of boundaries. I acknowledge the rules but… there is always something MORE. This is my motto: more – beautiful, happy, elegant, cool, relaxed, innate.